The first recorded Methodist meeting in Lansing was held in 1845 when the Reverend Lewis Coburn preached in the log cabin of Joab Page of North Lansing. In 1850 a Methodist class (congregation) was formed in what is now central Lansing. Its first leader was the Reverend Resin Sapp, chaplain of the Michigan legislature. Services were held at Representative Hall in the old state capitol. The same year, the state deeded land at the corner of Washington Avenue and Ottawa Street to the First Methodist Episcopal Church under Public Act No. 231 of 1848. That land was subsequently turned over to the Central Methodist Episcopal Church, which built its first building in 1863. The present Romanesque style edifice was erected in 1888-1889 and is perhaps the only church designed by Elijah E. Myers, architect of the State Capitol. 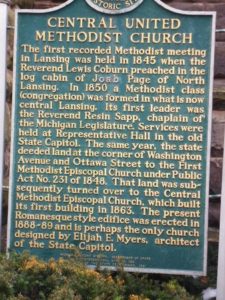